Emblem is a free and open source project avatar generator for Linux. Using Emblem application you can create beautiful avatars for your Matrix rooms and git forges. It is released under GPL-3.0-or-later license. Just choose your symbolic icon and set color or gradient and you can also toggle between white and black. You can export the square and circle logo image in png and svg file format. 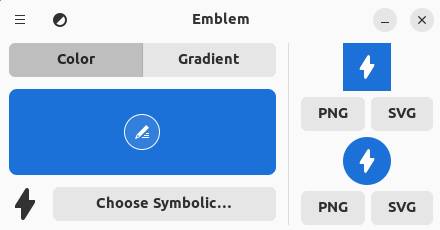 Emblem is available as a flatpak file format from flathub. First you need to install the flatpak and flathub on your system and restart it. After that run below Emblem flatpak installation command. It will install the latest version of Emblem on your system.

Now run Emblem app using below command. You can also run it via applications menu.

You can also uninstall Emblem using