ScreenCloud is a free open source cross platform screenshot tool for taking and sharing screenshots on Linux, Windows and Mac OS. You can share your screenshots easily via Dropbox, Google Drive, imgur and even to your own server via FTP and SFTP. In mean time the uploaded screenshots links are automatically copied to your clipboard. It also comes with build in screenshot editor and plugin support. Using plugins you can extend ScreenCloud screenshot tool feature. 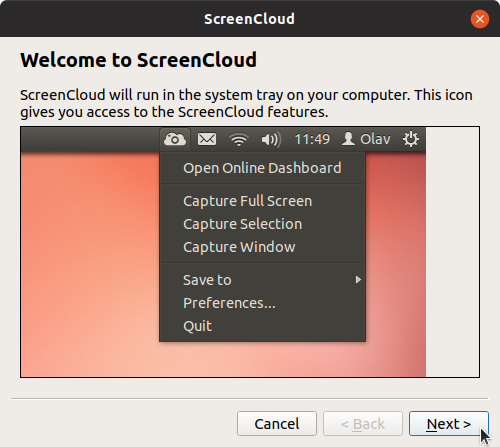 ScreenCloud is available a snap package for Ubuntu. You can install it via your Ubuntu terminal app. Open your terminal app and run the below command and press the enter key.

Then type your Ubuntu Password and hit enter. It will install the latest version of ScreenCloud screenshot taking and Sharing tool on Ubuntu.

After the installation of ScreenCloud screenshot tool, click the show applications in the Ubuntu Gnome dock and type ScreenCloud in the search box and click ScreenCloud to open it. For Unity you can search ScreenCloud from Ubuntu dash.

Screencloud will stay on your Ubuntu system tray. you can access from there. Initially it offers 3 default screen capture key shorcuts later you can change the keys.

Create a feature in WHM