Notable is a free and open source markdown based note taking and markdown editor for Windows, Linux and MacOS. Using this you can write your notes in markdown. It also supports KaTeX expressions and Mermaid diagrams. It comes with build in syntax highlighting, multi-cursors and a minimap and dark theme support. You can also edit your notes via any other 3rd party editors and synchronized via Dropbox. Some other important features are minimalistic zen mode, quick open, favoriting, pinning, deleting, tagging, Attachments, split-editor support. You can Import notes from Evernote or Boostnote and export notes to Markdown, HTML or PDF. 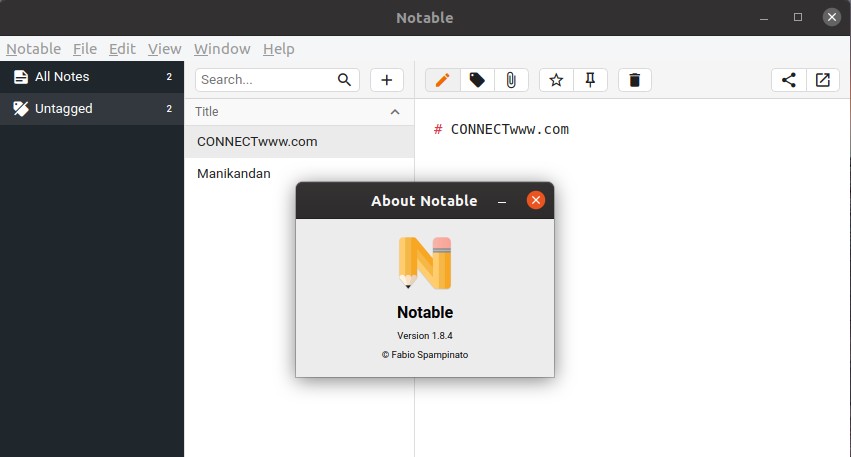 Notable is currently available as a deb and appimage package files for Ubuntu. And it is also available as snap.

Install Notable on Ubuntu via deb:

Download Notable Markdown Note Taking app in .deb file from the above download link. Here Downloads is my default download folder. Then open your ubuntu terminal app (ctrl+Alt+T) and run this command to go to the Downloads folder.

After that run this command.

Then click the show applications in the Ubuntu Gnome dock and type Notable in the search box and click notable to open it.

Install Notable on Ubuntu via AppImage:

Then to make file executable run below command.

Enter your Ubuntu password and to start run this in terminal.

How to install Slack for Linux on Ubuntu

How to install OnionShare on Ubuntu – Secure and Anonymous File Sharing

How to install Unity Tweak Tool in ubuntu