Bashtop is a free and open source resource monitor for Linux. Using this you can monitor your system and it shows usage and stats of your processor, network, processes, memory and disks. It comes with easy to use menu and responsive keys selection. You can filter the processes and scale UI in bashtop. It also supports SIGTERM, SIGKILL and SIGINT. It is released under open source Apache License 2.0 license. You can also switch between sorting options easily in bashtop. It support themes. This is very cool and useful command line application for terminal lovers. 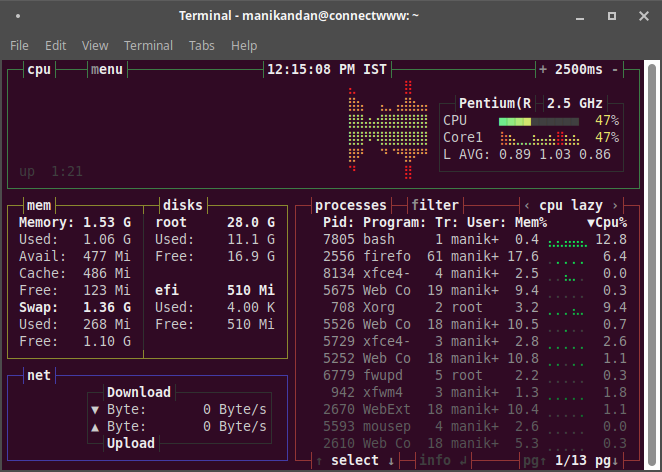 You can install Bashtop resource monitor on Ubuntu via the official Ubuntu PPA. Open your terminal app (ctrl+alt+t) and type the below command . Hit the enter key.

Then if needed type your Ubuntu user password and hit enter. Then again press the Enter key to confirm the PPA addition to your system. Then run below command to update your source list.

After that run this command to install Bashtop on Ubuntu.

Then you can start bashtop by running this command on terminal app.

You can find the help and options details in the bashtop. Just press the m key open the menu after launching bashtop.

How to install CopyQ on Ubuntu – Best Clipboard Manager for Linux