How to install Movie Monad Video Player on Ubuntu

Movie Monad is a free and open-source video player for Linux. It is released under GNU GPL v3 license. Movie Monad is a easy to use Haskell, GStreamer and GTK based video player. Using this you can play your local files from your computer and also stream online videos. It comes with play, pause, seek, repeat, slow speed and fast speed, turn subtitles off, pick your language and mute control support. Some other important features are full screen video and resize the video support. It also comes with command line support so you can play your videos from the command line. 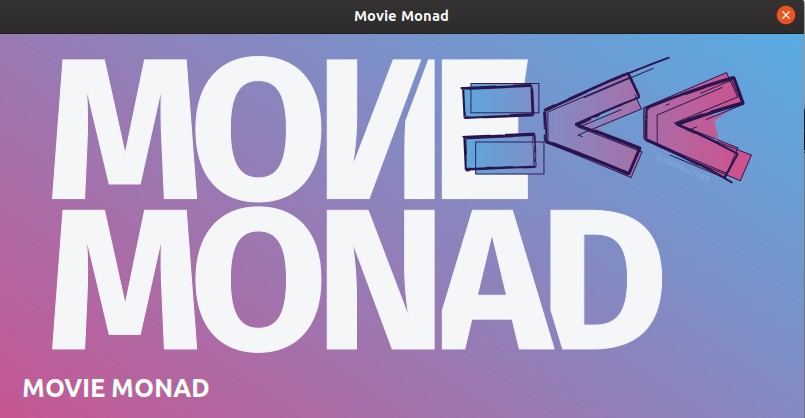 You can install install Movie Monad Video Player on Ubuntu via the portable appimage, Flatpak and snap package.

Download Movie Monad Video Player in AppImage file package on your system from the below download link.

Then right click on the downloaded Movie Monad .AppImage file and select Properties.Then go to the Permissions tab and check the Allow executing files as program option. Or you can also change the file permission via below command in your Ubuntu terminal app. Open terminal(ctrl+Alt+T) and run the command in the terminal to navigate Downloads folder. The my appimage download path is Downloads folder.

Then run this command. If needed type your Ubuntu password.

Here “movie-monad-0.0.7.0-x86_64.AppImage” is downloaded file name. you can change the file name in above command according to yours.

Then run this command and press the enter key to start Movie Monad Video Player.

After the installation of flatpak in you Ubuntu, Open your terminal app (Ctrl+Atl+T) and run the below command

You can also install this video player via snap on your Ubuntu. For that in Ubuntu terminal (Ctrl+Alt+T) run this command.

Then type your Ubuntu password and press the enter key. It will install the latest version of Movie Monad Video Player on Ubuntu. Then click the show applications in the Ubuntu Gnome dock and type Movie Monad in the search box and click Movie Monad to open it.